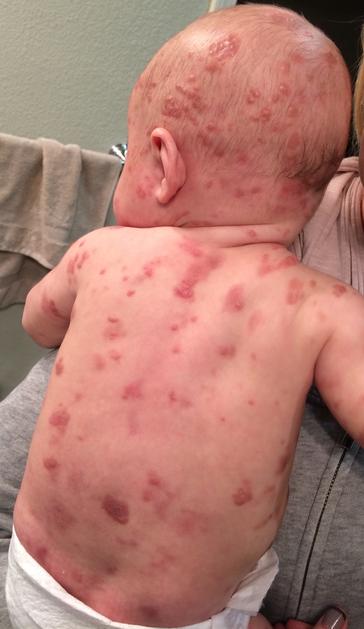 ​Mast cell diseases include mastocytosis, where the body produces too many mast cells, and mast cell activation syndrome (MCAS), where even the normal number of mast cells are too easily activated by a trigger to release their contents, called mediators. These mediators can cause a variety of unpredictable symptoms in both children and adults, including skin rashes, flushing, abdominal pain, bloating, nausea, vomiting, headache, bone pain and skeletal lesions, and anaphylaxis. Triggers can be heat, cold, stress (physical or emotional), perfumes or odors, medications, insect stings, and foods. These symptoms are treated with medications including antihistamines, mast cell stabilizers, and leukotriene inhibitors, while anaphylaxis is a medical emergency requiring epinephrine. Mastocytosis can affect skin and internal organs such as the bone marrow, gastrointestinal tract, liver, and spleen. Most patients with mastocytosis have cutaneous (skin) or indolent (benign) systemic forms, but aggressive disease can occur, which may require chemotherapy.  There are several different types of Cutaneous Mastocytosis. Urticaria pigmentosa is the most common form and is characterized by brown patches on the skin where mast cells have accumulated. Diffuse Cutaneous Mastocytosis (DCM) is a very rare form of the condition that presents at birth with skin that is thickened and easily blistered. A mastocytoma is a raised nodule that is also usually seen in infancy.

DCM is a rare form of CM characterized by generalized erythroderma, various degrees of blistering, skin with a ''peau d'orange'' appearance and the accumulation of mast cells in the skin. At least two DCM variants are recognized, one with extreme blistering (Bullous DCM) and one with infiltrations (Pseudoxanthomatous DCM).  DCM accounts for around 1-2% of all cases of CM and almost exclusively presents during infancy, mainly in the neonatal period. Less than 30 cases of neonatal onset DCM have been described in the literature so far. The majority of patients present with generalized erythroderma with a reddish to brown-orange discoloration and extensive bullae. The blisters may become hemorrhagic, may be grouped or linear, and are usually located on the trunk, extremities or scalp. The bullous lesions typically resolve by 3-5 years of age. A small number of patients have been reported with yellow-orange infiltrated and xanthogranuloma-like abnormalities as the presenting feature of DCM (Pseudoxanthomatous DCM). Over time, the skin becomes thickened and has a doughy consistency. Other cutaneous manifestations may include pruritus, urticaria, a positive Darier's sign and marked dermographism. Systemic symptoms (including flushing, hypotension, severe anaphylaxis, hepatomegaly, diarrhea and gastrointestinal bleeding) appear to be more common in DCM than in other forms of CM with systemic symptoms. DCM generally occurs sporadically but a few familial cases have been reported. Mutations in the KIT gene (4q11-q12) have been identified in patients with some forms of mastocytosis and mutations in this gene have been identified in a few patients with DCM.  Diagnosis may be suspected on the basis of the clinical findings and can be confirmed by histological examination using mast cell stains (Giemsa and toluidine blue) or immunohistochemical staining for tryptase or kit. Measurements of serum tryptase and urinary N-methylhistamine levels may also be useful for diagnosis and follow-up.  A diagnosis of mastocytosis is confirmed by a bone marrow or skin biopsy.  Although spontaneous resolution of the bullous lesions occurs before 5 years of age in most DCM patients, the prognosis is variable: DCM is associated with an increased risk of systemic involvement with life-threatening manifestations (gastrointestinal bleeding, anaphylaxis etc.). The association of DCM with mast cell leukemia has been reported in a few patients and persistence of DCM into adult life with transformation to indolent systemic mastocytosis has been described.